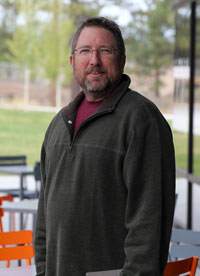 Andrew Ketsdever is the interim vice president of OSU-Cascades. Previously, he served as dean of academic affairs and the chief academic officer for the campus with responsibility for expanding degree programs to meet industry needs, advancing research efforts and leading faculty instructors and researchers. He serves on the OSU-Cascades leadership team and has standing as a professor in OSU’s School of Mechanical, Industrial and Manufacturing Engineering.

Ketsdever joined OSU-Cascades in 2018 as an associate dean, overseeing degree programs in science, technology and engineering, and leading research and faculty diversity efforts.

Prior to joining OSU-Cascades, Ketsdever was a professor in the Department of Mechanical and Aerospace Engineering at the University of Colorado, Colorado Springs, where he served as department chair.  There, he was director of Online Graduate Programs for the College of Engineering and Applied Science.

He was also director of the UCCS Center for Laser, Energy and Exploration Research, overseeing a research program with more than $3 million in grant and other funding.  In 2018 he was named the USCC College of Engineering Researcher of the Year.

Ketsdever earned his bachelor’s and master’s degrees and a Ph.D. in aerospace engineering from the University of Southern California in Los Angeles.  While pursuing his education, he joined the Propulsion Directorate of the United States Air Force Research Laboratory at Edwards Air Force Base.  As a technical staff member, he pioneered development of micro spacecraft propulsion systems, co-edited the authoritative volume on the subject in 2000 and holds patents in this area. He was the founding program manager for Advanced Propulsion and Power Concepts and group leader for Nonequilibrium Flows.

During a 20-year career with the U.S. Air Force, he was appointed as a Distinguished Visiting Professor in the astronautics department at the U.S Air Force Academy.  At the Air Force Academy, he was also program manager for FalconSat IV, a small satellite developed to be launched into low-Earth orbit.

Andrew is currently an associate editor for the Journal of Spacecraft and Rockets and is an associate fellow with the American Institute of Aeronautics and Astronautics.