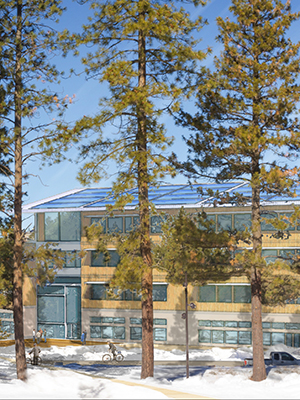 A $5 million gift to Oregon State University – Cascades will propel the university toward its next phase of capital development, which will include a second academic building for the growing campus. The gift from an anonymous donor represents the largest donation ever received by the Bend campus.

“A visionary gift like this, at the onset of our efforts to seek capital funds from the Oregon State Legislature, makes a powerful and motivating statement,” said OSU-Cascades Vice President Becky Johnson.  “Our appreciation is tremendous, as the gift signals to our elected officials and supporters how important higher education is for all of Oregon.”

The investment is a profound step toward a $10 million philanthropic match required for the state capital funding currently sought by OSU-Cascades, according to Johnson.

In total, OSU-Cascades is seeking $69.5 million in state bonding from the 2017 Oregon Legislature for the next phase of campus expansion. The project includes preparing adjacent land for expansion and constructing an academic building and Student Success Center. With the commitment of state funding, the anonymous donation will be applied to construction costs for the new academic building.

In his recent State of the University address, OSU President Ed Ray called the expansion of OSU-Cascades the fulfillment of a 30-year community dream to bring a four-year university to Central Oregon. He emphasized its potential impact on the state’s economy. According to ECONorthwest, if work on the Bend campus occurs as planned, in 2025 OSU-Cascades will contribute $197.8 million in total annual economic output throughout Oregon.

“OSU-Cascades is providing valued education, cultural opportunities, research and innovation to Oregon’s fastest-growing region,” Ray said. “I know that Central Oregon residents would say they have waited long enough for a four-year university. I hope that all Oregonians will agree that this university campus and its statewide benefits are long overdue.”

OSU-Cascades’ proposed additional capital facilities will provide needed instructional classroom, laboratories and student support space for the growing student enrollment at OSU-Cascades. Over the past five years, OSU-Cascades has been the fastest growing public university in Oregon. More than 1,100 students are pursuing degrees at the Bend campus, which can currently accommodate up to 1,890 students. Plans are to grow enrollment to 3,000 to 5,000 students.