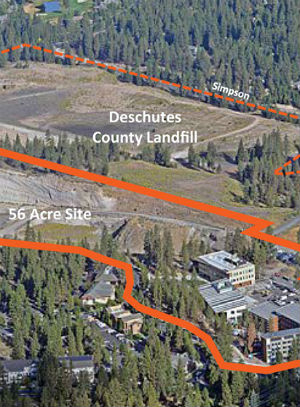 Aerial view of OSU-Cascades properties for its expanded campus.

The council’s vote Wednesday night follows a required review by the city that was initiated in January and rezones the campus property as mixed used.

“The Bend City Council’s approval enables OSU-Cascades’ mission to serve the education needs of our region’s students and communities, and it supports regional economic development,” said Becky Johnson, vice president of the Bend campus. “We appreciate the due diligence that the City Council and city staff provided in reviewing the master plan over the past six months, as well as the contributions of many hundreds of area residents.”

Community input for the master plan was gathered by university officials over a three-year period. During that time, nearly 1,500 community members contributed planning ideas, concerns and feedback, serving on advisory groups or attending one of more than 30 public and neighborhood association meetings held throughout the Bend community.

The master plan covers three adjoining properties that OSU-Cascades owns: the existing 10-acre campus, a 46-acre former pumice mine and the 72-acre former Deschutes County demolition landfill. The plan outlines OSU-Cascades’ intent to fill and grade the land into a series of terraces, thus minimizing fill being transported to the campus from off-site locations.

The plan details campus districts that will serve academic functions, residential housing, recreation, and an innovation district where businesses can locate and collaborate with OSU-Cascades research faculty and student interns.  The plan also includes 10 miles of walking and bike paths.

As part of the master plan development, during the first phase of campus development, OSU-Cascades will fund construction of a traffic roundabout near the campus at Columbia Road and Colorado Avenue. Over the course of the campus buildout, nearly a  dozen additional area infrastructure improvements will be funded, including new street turn lanes and sidewalks in order to help mitigate anticipated traffic impacts.

On-campus parking areas will be built during each phase of the campus development, ultimately providing  1,766 spaces. According to the master plan, an additional 514 parking spaces can be added if needed, exceeding city requirements.