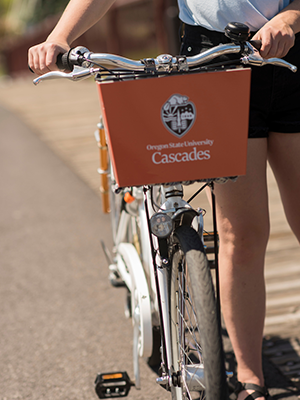 More than 1,800 student and community users take advantage of the bike share program launched by OSU-Cascades.

A year after it expanded for public use, the Zagster bike share program launched by Oregon State University – Cascades will expand again, adding two new bike stations in Bend.  The additional stations are located in the downtown area.

With the station additions the bike share system has grown to 55 bikes and eight stations.

A celebration will officially open the new stations and take place at 12 p.m. on July 30 at one of the station locations, located on NW Galveston Avenue, between 12th Street and Federal Avenue.

The newest stations were made possible with sponsorship from 10 Barrel Brewing Company and SELCO Community Credit Union.  The second station is located at the north end of downtown Bend on the southwest corner of the Newport Avenue and Wall Street intersection.

The program launched for the OSU-Cascades campus community in the fall of 2016 with 30 bikes at three stations on and near the campus.  The addition of private sponsors in June 2017 made expansion to the public possible and since then the program has gained more than 1,800 active members and recorded 4,900 user trips.  Year-to-date, rides have more than doubled compared to the same period in 2017.

With additional sponsors, university officials hope to expand the bike share program to the east side of Bend.

Members of the public age 18 or older  can join the program via the Zagster app or at www.zagster.com/bend. A new pay-as-you-go option offers 30-minute trips – a typical trip length – for $1.50.

Note to Editors: A digital image is available for download and use with this article: https://bit.ly/2uWKmMb