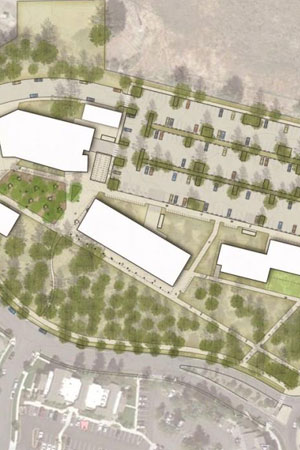 Oregon State University will begin construction of its new OSU-Cascades campus as soon as required permits are issued by the city of Bend – a process that is expected to take place within the next two weeks.

“This is ultimately about educational opportunities for Central Oregon,” said Ed Ray, Oregon State University president.  “Every year that we delay the campus, another group of young people leave Central Oregon to seek a four-year university degree, and many never return. The start of construction signals that the 30-year aspiration to bring a four-year university to Bend – the largest population area in Oregon without a university – is finally being realized.”

Oregon State University officials expect to have the required permits and to initiate construction activities, including excavation and tree removal during the week of June 29.

OSU-Cascades Vice President Becky Johnson said starting construction this summer makes it possible for the OSU-Cascades’ campus to open for classes in fall 2016. However, severe weather or other construction delays may result in an opening later in the academic year.

Initial campus development will include two buildings: a 43,650-square-foot academic building and a 113,000-square-foot residence hall and dining center complex, as well as campus streets, pathways and parking.

The new four-year university campus will serve up to 1,890 students. OSU-Cascades will enroll freshmen for the first time in fall 2015 and in the interim conduct classes for undergraduate students at Cascades Hall on the Central Oregon Community College campus and at OSU-Cascades Graduate & Research Center. A new shuttle will transport students between the two facilities.

Johnson said the decision to begin construction was made knowing that yet another appeal may be filed to challenge previous approvals for development of the 10.44-acre campus. Previously, the city of Bend planning staff, a Bend land use hearings officer, the Bend City Council and LUBA have approved the site development plan for the campus.

“OSU carefully reviewed the State Land Use Board of Appeals’ (LUBA) June 8 decision affirming OSU-Cascades' site plan approval for a 10.44-acre campus in Bend,” Johnson said. “The LUBA decision fully and strongly affirmed the city of Bend's approval of this site plan.”

Appellants have indicated that they intend to provide notice by a June 29 deadline of their intent to appeal the LUBA decision to the State Court of Appeals.

“Under local code and state law, development is allowed to continue while an appeal is pending.” Johnson said. “Initial construction work will include site preparation and will be completed within city of Bend and Oregon land use laws. All work will be conducted in accordance with city of Bend-issued building permits.”

Johnson said Oregon State has fully assessed an unlikely remand or reversal of LUBA’s decision by the Courts of Appeals.

“Oregon State is confident that significant construction progress can be made while a potential appeal is being considered and still allow the university to adjust to changes that could result from an unlikely remand or reversal by the Court of Appeals.”

Johnson said construction activity will follow dust and noise mitigation plans and processes, and will minimize construction equipment travel on community streets.  These plans included input from many community members who participated in the Campus Expansion Advisory Committee Neighborhood Livability task force and were adopted by OSU-Cascades.

“During construction, OSU-Cascades will keep the public fully informed – and respond to questions regarding the campus’ construction progress – via the OSU-Cascades website, social media and other communication channels,” Johnson said.

Ray said Oregon State University and OSU-Cascades will continue working with Bend and Central Oregon residents, as well as with community, business and education leaders.

“We will continue to engage in collaborative planning and problem-solving by actively seeking public input,” Ray said. “Working together, we can tackle legitimate concerns about traffic and housing, while ensuring OSU-Cascades will bring the educational, economic and cultural benefits to Central Oregon that will add to the region’s quality of life.”