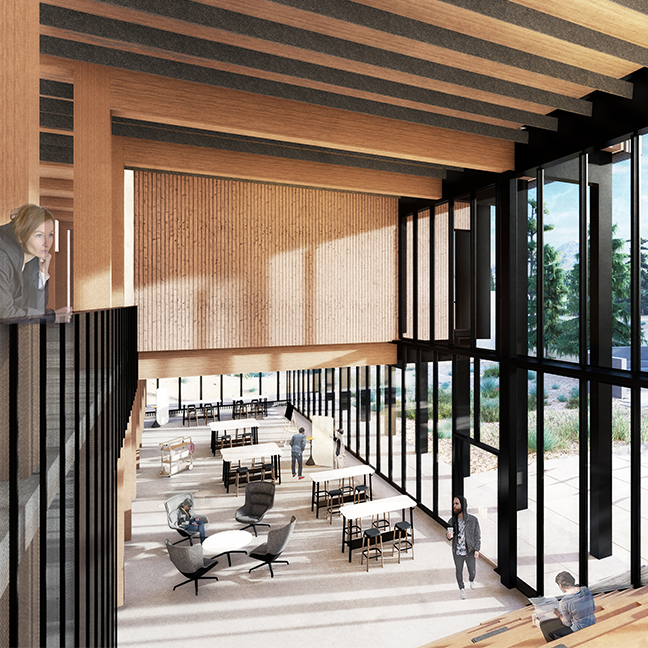 Currently under construction, OSU-Cascades' second academic building incorporates cross-laminated timber and will be net zero energy-ready. It is slated to open in fall 2021.

In the year since construction began to expand the Oregon State University – Cascades campus, sheer cliffs of a 100-foot deep former pumice mine have been transformed into gradual slopes, and the structure of a second campus academic building has emerged.

Campus planners also recently concluded a study that confirmed a major sustainable energy source for the expanded campus. A ground water based geo-exchange system will connect to an aquifer 500-feet beneath the campus surface for year-round heating and cooling of campus buildings.

The first campus building to utilize the geo-exchange energy system is currently under construction. The 50,000 square-foot, net zero energy-ready academic building will incorporate cross-laminated timber, which is increasingly considered a viable alternative to materials like concrete or steel.

Timber materials for the building were sustainably harvested and produced from Pacific Northwest forests, according to mass timber experts involved with the project.

“With its innovative design and construction features, OSU-Cascades’ second academic building is our ‘North Star’ for sustainability” said Kelly Sparks, associate vice president for finance and strategic planning. “The building sets a standard for sustainability and will help us meet the bold expectations laid out in the campus’s long range development plan.”

As part of the campus’s first phase of land remediation, more than 625,000 tons of fill material have been excavated from the pumice mine floor, and replaced with engineered-fill that provides a stable base for a center area that will serve as a green oval and the location of future buildings.

Engineered fill was produced on-site using materials from the floor of the former pumice mine as well as from the adjacent former county demolition landfill, also owned by the university. The land remediation process to reuse existing materials eliminated the need to import fill materials from off-site. The process is estimated to have saved nearly 30,000 truck trips on area roads according to campus planners.

The 2018 Oregon State Legislature authorized funding to construct the second academic building and donors contributed $10 million to match state funding. The total cost of the new building, including site preparation and the first phase of onsite infrastructure for the expansion is $49 million. The building is anticipated to open in fall 2021.

The building’s construction is included in the first phase of the campus expansion master plan, which was approved by the city of Bend in 2018.  The master plan outlines a roadmap for developing a 128-acre campus over several decades near the city center to serve 3,000 to 5,000 students.

For more information about the OSU-Cascades expansion, visit OSUcascades.edu/expansion.

Note to Editors: Images of the second academic building, land remediation and master plan can be found at https://beav.es/ox5.