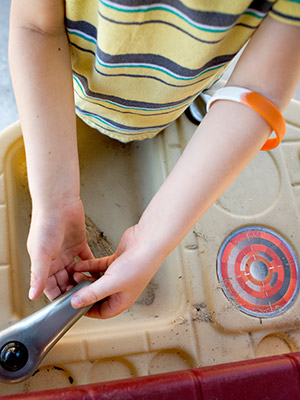 Some chemicals added to furniture, electronics and numerous other goods to prevent fires may have unintended developmental consequences for young children, according to a pilot study released today.

Researchers from Oregon State University found a significant relationship between social behaviors among children and their exposure to widely used flame retardants, said Molly Kile, an environmental epidemiologist and associate professor in the College of Public Health and Human Sciences at OSU.

“When we analyzed behavior assessments and exposure levels, we observed that the children who had more exposure to certain types of the flame retardant were more likely to exhibit externalizing behaviors such as aggression, defiance, hyperactivity, inattention and bullying,” said Kile, the corresponding author of the study, which was published today in the journal Environmental Health.

“This is an intriguing finding because no one had previously studied the behavioral effects of organophosphate classes of flame retardants, which have been added to consumer products more recently.”

Flame retardants are found throughout the built environment in furniture, mattresses, carpeting, electronics, vehicles and more. The chemicals are added to the products and are not bound in the material, which causes them to be released into indoor environments.

Manufacturers began adding flame retardants in 1975, in response to new legislation in California designed to reduce flammability in common household items. The state updated its flammability standards in 2014, and now allows furniture manufacturers to meet the standards without adding flame retardant chemicals to their products, but the chemicals are still widely used and they linger in the indoor environment.

There are growing concerns that some flame retardants may have unintended impacts on health and development in children, and this study contributes to that body of research.

Past research has shown that both BDEs and OPFRs are linked to poorer cognitive function in children. But less is known about the relationship between the flame retardants and children’s social and emotional health, particularly during early childhood, a key developmental period for learning.

“The social skills children learn during preschool set the foundation for their success in school, and also for their social and emotional health and well-being later in life,” said Shannon Lipscomb, an associate professor and lead of the human development and family sciences program at OSU-Cascades and a co-author of the study.

For this study, the OSU research team recruited 92 Oregon children between ages 3-5 to wear a silicone wristband for seven days to measure exposure to flame retardants.

The team included Kile, Lipscomb; Megan McClelland and Megan MacDonald of the OSU College of Public Health and Human Sciences; Kim Anderson of the OSU College of Agricultural Sciences; and Andres Cardenas of the Harvard T.H. Chan School of Public Health and an OSU doctoral graduate. The research was supported by OSU’s Hallie E. Ford Center for Healthy Children and Families and the Environmental Health Science Center at OSU.

The wristbands, developed by Anderson at OSU, have a porous surface that mimics a cell, absorbing chemicals that people are exposed to through their environment. When the wristbands are returned, Anderson can screen for up to 1,200 chemicals that may accumulate. The wristband is an easy and non-invasive way to sample children’s chemical exposure.

The researchers had parents or primary caregivers complete questionnaires about socio-demographics and the home environment, and preschool teachers completed behavior assessments for each participating child. In all, researchers had complete data and wristband results for 69 children.

Their analysis showed that all of the children were exposed to some level of flame retardant. Children who had higher exposure rates of OFPRs showed less responsible behavior and more aggression, defiance, hyperactivity, inattention and bullying behaviors. Children with higher exposure to BDEs were seen as less assertive by their teachers. All of these social skills play an important role in a child’s ability to succeed academically and socially.

“We detected these links between flame retardant and children’s social behaviors while controlling for differences in family demographics, home learning environments and adversity,” Lipscomb said. “This suggests that flame retardants may have a unique effect on development apart from the effects of children’s early social experiences.”

Further study is needed to better understand the links between flame retardants and children’s social skill development, the researchers said. They plan to pursue funding for a new study that continues for a longer period of time and considers how other aspects of children’s lives might affect the impact of flame retardants on their development.

“The results of this research to date have shown potential impacts for child health and warrant a more thorough investigation,” Kile said.

“If scientists find strong evidence that exposure to flame retardants affects children’s behaviors, we can develop strategies that prevent these exposures and help improve children’s lives. This type of public health science is needed to figure out how to address the root causes of behavioral concerns that can affect children’s school readiness and overall well-being.”