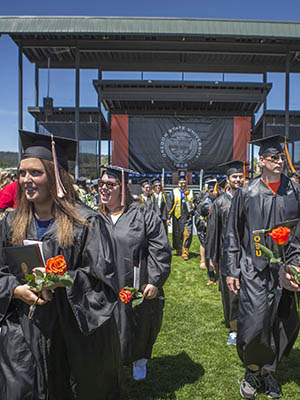 Including the Class of 2018, more than 3,800 students will have graduated from OSU-Cascades since it was established in 2001.

At its 17th Commencement on Sunday, June 17, Oregon State University - Cascades will honor the second largest graduating class in its 17-year history, a class of 368 students. One third of the undergraduates – 91 students – will be the first in their families to earn a bachelor’s degree.

Campus officials anticipate that more than 2,500 family and friends of graduates will attend the ceremonies at the Les Schwab Amphitheater in Bend.  Nearly 290 students plan to participate in the ceremonies.

Including the Class of 2018, more than 3,800 students will have graduated from OSU-Cascades since it was established in 2001.

The commencement event will begin at 12 p.m.  OSU-Cascades Vice President Becky Johnson will preside over the ceremonies.

Preston Callicott, chief executive officer of Bend-based Five Talent Software will deliver the commencement address. He is the son of an American father and a Colombian mother, and the first on his paternal side to earn a college degree. Callicott has devoted a nearly 40-year career to the technology industry and served in volunteer leadership roles for organizations including Bend 2030, Bend Economic Development Advisory Board, Looking Forward, Opportunity Knocks and OSU-Cascades.

In addition to Johnson and Callicott, members of the platform party include Kirk Schueler, representing the OSU Board of Trustees; OSU Provost Ed Feser; Oran Teater, chair of the OSU-Cascades Advocacy and Advisory Board; Julie Gess-Newsome, dean of academic affairs at OSU-Cascades; and members of the faculty.

During the commencement event, Teater will present the OSU-Cascades Distinguished Service Award, created to honor individuals, businesses or organizations that have made exceptional contributions to OSU-Cascades, Central Oregon, the State of Oregon or the world.

He will present the award to his wife, Jane Evey Teater. Mrs. Teater is a former educator and community leader, whose dedication to K-12 and higher education has made an enormous impact in Central Oregon.

The commencement ceremony will include remarks by OSU-Cascades candidate for graduation, Marika Yuma, a student originally from Finland who will earn a Master of Arts in Teaching.  Student body president Jordyn Langeliers, a business major, will also present to the graduating class.

Some facts and figures about the OSU-Cascades Class of 2018:

To learn more about the OSU-Cascades Commencement Ceremony, visit http://www.osucascades.edu/commencement.