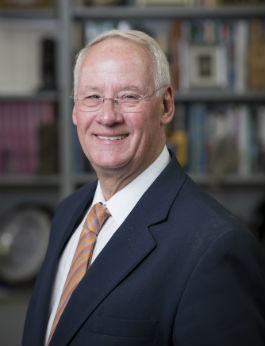 Oregon State University President Edward J. Ray today called for an infusion of state support for facilities and infrastructure on OSU’s expanding OSU-Cascades campus and for the university to achieve aggressive student success strategies by 2020.

“The development and success of OSU-Cascades cannot be just a mandate for Central Oregon and Oregon State University,” Ray said. “It must be a statewide priority, and I intend to make that point clear as we move toward the 2017 legislative session.”

Ray addressed these and other matters during his State of the University Address at the Riverhouse Convention Center attended by more than 300 people.

“We cannot build a four-year university from the ground up from the allocations that Oregon State University has traditionally received from the state as one of Oregon’s existing seven universities,” Ray said. “Funding for this new campus should not come from funds that historically sustain the seven public universities in the state. There must be an infusion of new investment in OSU Cascades facilities and infrastructure.”

Ray also announced the naming of Tykeson Hall, the first academic building to be constructed on OSU-Cascades’ new campus. The building will open for fall 2016 classes and is a 44,000-square foot facility that will house classrooms, laboratories, faculty offices and student support offices.

The building was named “in honor of the philanthropy and phenomenal leadership support that the Tykeson family has provided OSU-Cascades and Oregon State University,” Ray said.

In addressing the expansion of the Bend campus, Ray underscored the need for OSU and community members to continue working together. He also reaffirmed the university and the OSU Foundation’s commitment to contribute financial support, while seeking state funding.

OSU-Cascades has requested $69.5 million in state bonding for the next phase of its expansion, which will include site reclamation, infrastructure improvements, a second academic building and a student success center.

Ray devoted attention to the success of OSU’s students and reaffirmed a pledge made earlier this year that by 2020 OSU will better serve students of diverse backgrounds and ensure that all students attending Oregon State will achieve academic success “regardless of their economic status, color of their skin or family background.”

He outlined a student success initiative that calls on each Oregon State student having at least one “experiential” learning opportunity such as an internship, study abroad experience, participation in original research or other similar experience. He said the university will work to make an OSU degree an affordable reality for every qualified Oregonian. He asked alumni, donors, community members and political leaders to “help achieve by 2020 this new horizon of inclusive student success and excellence.”

In his address, Ray recognized achievements of the Bend campus, including the:

Ray also recognized Evan Gibson of Sisters, who has been awarded a prestigious Oregon State Presidential Scholarship. Gibson will attend OSU-Cascades in the fall with his twin brother, Grant.