When Ryan Schwartz '22 was 17, his parents moved to Morocco to teach. They weren’t sure how long they would be there, so Ryan opted to stay in Bend and start college. He graduated from high school early, moved into the residence hall at Central Oregon Community College, and started earning a marketing degree with a goal of helping environmental organizations. 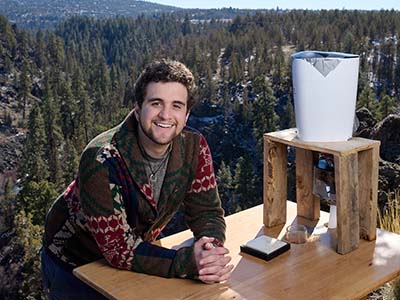 Then he realized two things – he was too much of a hippie to be in marketing – and he liked science much more than business.

Ryan transferred to OSU-Cascades after earning an associate’s degree to pursue a bachelor’s in biology.

“I’m so grateful for the scholarships from OSU-Cascades.” he said. “They’ve made my degree possible.”

Now a senior, Ryan is pursuing research, too. In one project, he’s testing for altruism and self-awareness in crows. Ryan collaborated with engineering students Markie Egger and Ben Goetsch to build a device that opens a food dish when a crow lands on it. The food dish is out of reach and if the crow jumps off the device, it closes. Will the crow hold the dish open for other birds?

Almost all research done on bird cooperation is done with birds in captivity, while Ryan is testing the wild bird population. “It seems odd to conclude species behavior when the sample studied is not representative of the true population,” he said.

His other research project is focused on measuring microplastics in Central Oregon’s lakes and streams. He hopes the system he creates can help researchers collect and analyze contaminant levels more easily.

In the future, Ryan wants to connect with people through science. He’s interested in genetic counseling and helping people understand genetic diseases, including those only now being discovered thanks to increased DNA testing. He also sees himself working in public health to support communities through complex health issues like COVID-19.

“Both areas are a perfect combination of science and interpersonal connection,” he said.