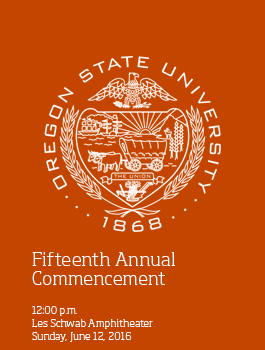 At its 15th Commencement on Sunday, June 12, Oregon State University - Cascades will set a record when it awards 379 bachelor’s and master’s degrees, and graduates the largest class in its history for the third consecutive year. This marks a 20 percent increase in degrees conferred over the previous year.

Campus officials anticipate that more than 2,500 family and friends of graduates will attend the ceremonies at the Les Schwab Amphitheater in Bend. Nearly 270 students plan to participate in the ceremonies.

In total, OSU-Cascades will have awarded more than 3,000 degrees since it was established in 2001.

The commencement event will begin at 12:00 p.m. OSU-Cascades Vice President Becky Johnson will preside over the ceremonies.

In addition to Johnson and Amen, members of the platform party include Kirk Schueler, representing the OSU Board of Trustees; Marla Hacker, Dean of Academic Programs at OSU-Cascades; and members of the faculty. Brenda McComb, Senior Vice Provost for Academic Affairs at OSU, will represent OSU's outgoing provost, Sabah Randhawa.

During the commencement event, Johnson will present the OSU-Cascades Distinguished Service Award, an award created to honor individuals, businesses or organizations that have made exceptional contributions to OSU-Cascades, Central Oregon, the State of Oregon, or the world.

She will present the award to community advocate and volunteer, Loren Irving. Irving is also a member of the OSU-Cascades Board of Advisors.

The commencement ceremony will include presentations by OSU-Cascades candidate for graduation, Austin Anderson, a student in the MFA in creative writing program from Orem, Utah. Student body president and natural resources major Camara Bedell-Stiles will also present to the graduation class.

The diploma received by each graduate represents an Oregon State University degree, and marks the same achievement and fulfillment of requirements, and carries the same rights, privileges and honors as degrees conferred at the main campus.