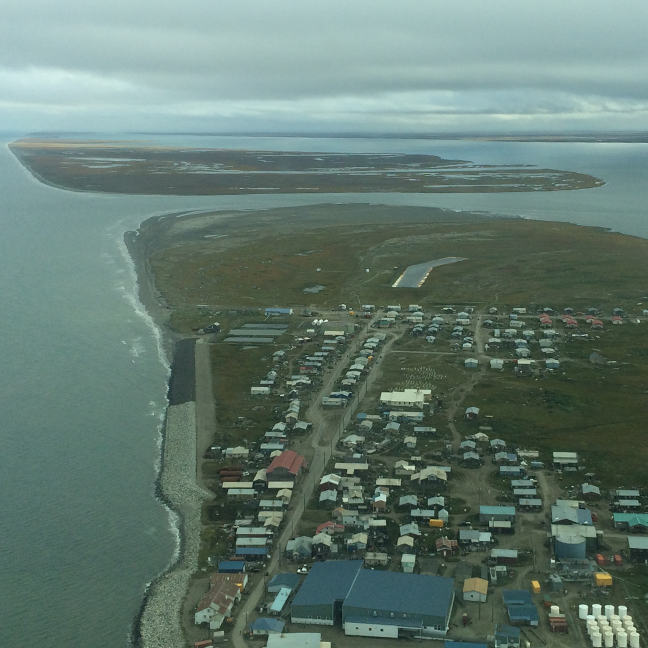 The village of Shishmaref in Alaska. Its residents confront repeated flooding due to a changing climate.

An Oregon State University – Cascades anthropologist has been awarded $750,000 by the National Science Foundation to research issues facing coastal communities exposed to repetitive flooding, and the effectiveness of federal disaster response policies.

Elizabeth Marino, an assistant professor in the OSU College of Liberal Arts, will lead a research team that will consider community needs and responses related to the impacts of severe storms and repeated flooding.

“These policies and solutions ignore the distinct needs of tight-knit and interdependent indigenous communities, such as those in rural Alaska, or other communities with a strong sense of social cohesion. This project hopes to understand how relocation as adaptation in the U.S. could be more robust and more equitable.”

Marino will lead a three-year study to investigate options for communities and individuals in Alaska and throughout the U.S. that face repetitive flooding. This work will also examine how communities have used relocation as an adaptation to increasing risks from frequent natural disasters.

Over the past five years, disaster costs nationally have doubled largely due to severe storms and flooding. Rising coastal waters are especially challenging for the 31 Native American communities in Alaska that depend on the ocean as an economic and cultural resource. As a result of rising sea levels, these communities face the increasing possibility that they must relocate to protect themselves from inundation, Marino said. Twelve of these communities have requested relocation assistance from the federal government, but Marino said have not yet been relocated.

Across the U.S. repetitive flooding of private properties makes up 2% of claims made through the National Flood Insurance Program, yet such flooding comprises more than 25% of the total claims made. Marino said she hoped that by mapping political and economic costs and incorporating historical examples and policy analysis, her team will find solutions that can be applied both in Alaska and to communities throughout the country that face flooding.

Marino is the co-director of The Laboratory for the American Conversation at OSU-Cascades. She studies relationships among risk, vulnerability, slow and rapid onset disasters, human migration, and sense of place. She is the author of "Fierce Climate, Sacred Ground: an Ethnography of Climate Change," a study of the village of Shishmaref, Alaska which confronts the daily realities of a changing climate.