Class of 2019 distinguished by record diversity and first-generation graduates 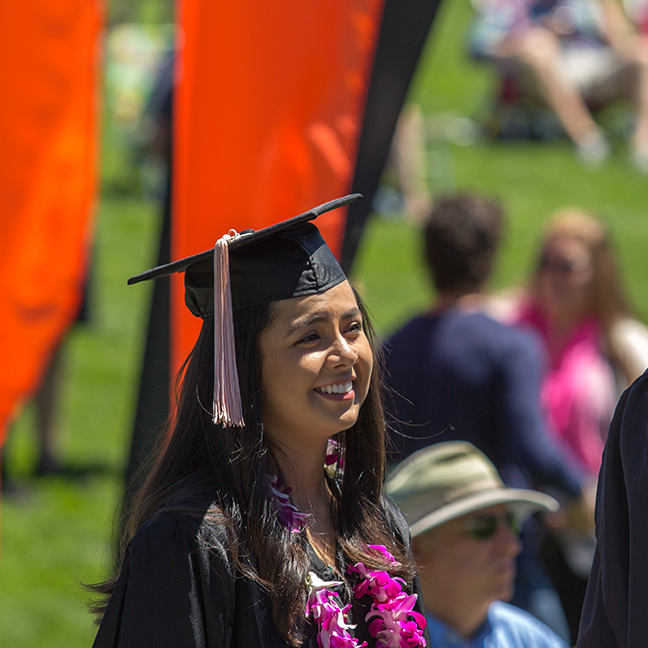 A record 40% of the Class of 2019 are first generation college graduates and 20% identify as U.S. minorities.

Oregon State University – Cascades will graduate its most diverse class ever during its 18th commencement ceremony Sunday, June 16, including a record number of graduates who are the first in their family to earn a college degree.

The graduating class of 331 students is the third largest in OSU-Cascades’ history. A record 40% are first generation college graduates, and 20% identify as U.S. minorities.

OSU-Cascades officials anticipate that more than 2,500 family and friends of graduates will attend the ceremony at the Les Schwab Amphitheater in Bend. Nearly 260 students plan to participate in the ceremonies.

OSU-Cascades Vice President Becky Johnson will preside over the ceremonies, which begin at 4 p.m.

Teater will present the OSU-Cascades Distinguished Service Award to Mike Hollern, chairman of Brooks Resources Corp. Hollern is the convener of the advisory board of the Central Oregon Regional Solutions Center and serves on private and public boards and foundations throughout the U.S. He is the former chair of the Oregon Transportation Commission. Hollern served on OSU-Cascades’ first board of directors from 2001 to 2007. He joined the current OSU-Cascades Advocacy and Advisory Board in 2018. The award is provided to individuals, businesses or organizations that have made exceptional contributions to OSU-Cascades, Central Oregon, the state of Oregon or the world.

The commencement ceremony will include remarks by Hunter Kennelly, who will earn a Bachelor of Science in kinesiology.  Student body president Reilly King, a human development and family sciences major, also will address the graduating class.

Some facts and figures about the OSU-Cascades’ class of 2019:

Including the Class of 2019, more than 4,100 students will have graduated from OSU-Cascades since it was established in 2001.

To learn more about the OSU-Cascades Commencement Ceremony, visit www.osucascades.edu/commencement.

Note to Editors: Digital images are available for download and use with this article: https://beav.es/ZYD