David Robson, one of the founders of E::SPACE Labs in Bend, saw a need to build affordable monitors to measure outdoor air quality in multiple locations around Central Oregon. Right now, the Oregon Department of Environmental Quality has only four monitors in the region – one in Bend, one in Sisters, one in Prineville and one in Madras. Air quality can vary greatly in Central Oregon due to the topography and size of the area – and the DEQ monitors don’t tell the whole story.

Creating an easy-to-replicate air quality monitor prototype was an ideal capstone project for energy systems engineering seniors Marisol Camacho, Chris Edwards and Brandon Hornabrook. The student team worked with Robson and their capstone advisor Chuck Allen to design, build and place the devices. Allen is the former executive director of Soar Oregon and is a member of the E::SPACE advisory board.

“During a wildfire last year, I was sitting in the smoke in town,” recalls Allen. “But my friends said it was crystal clear up at Elk Lake. We want to put sensors where the DEQ doesn’t have them.”

For Robson, getting an accurate reading on air quality is a public health service. “Poor air quality is a real danger to the elderly, children, pregnant women, and those with cardiovascular disease,” he said. Being able to accurately determine air quality around town helps keep people safe. The E::SPACE monitors measure the tiniest particulate matter from air pollution that can enter into the lungs and bloodstream. 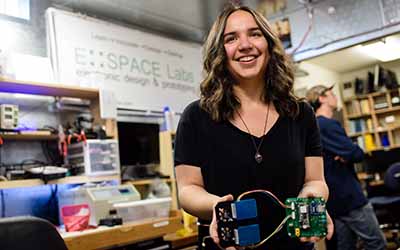 Camacho said the capstone project was a good combination of hardware design and software development. The team designed the circuit board with sensors, the enclosure it lives in, and – under the guidance of Allen – a website with an interactive map showing data from the four monitors they placed at their homes in Redmond and Bend.

“I’ve already referenced the project in job interviews,” said Camacho. “It was a great to work with a customer, gain real world engineering experience, and deliver a product.”

After reviewing the monitors with the DEQ, Allen says they have a few tweaks and are creating version two. They plan to place the new monitors all over Central Oregon – including in east Bend and at the summit of Mt. Bachelor.